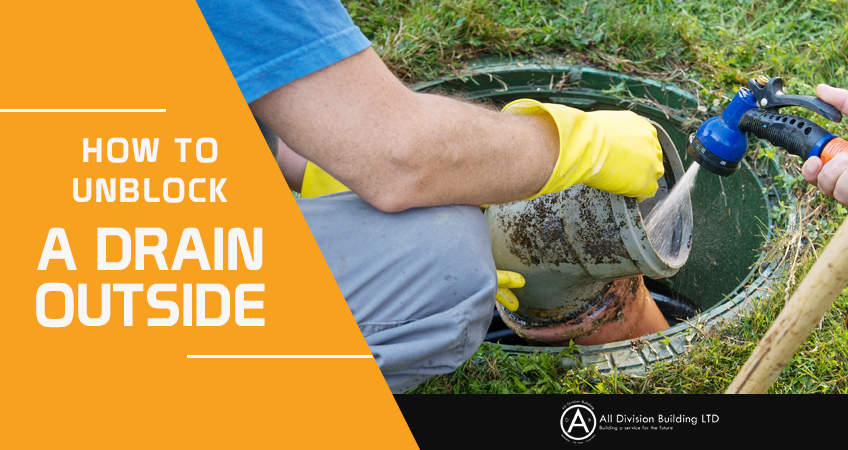 How to Unblock a Drain Outside

Blocked drains are all-to-common occurrences for homeowners. When it happens, it can lead to toilets backing up, foil smells, and bacteria being released into the home environment – not good.

If you’ve got a blocked drain and want to know how to unblock it, read on to find out more.

What is Outside Drainage?

If you have a blocked drain, the first thing you’ll want to check is whether a problem with your outside drainage is causing it. But what is “outside drainage,” exactly?

Outside drainage, in general, is any drainage infrastructure that connects your home’s internal plumbing to the mains. In includes pipes on the exterior of your property that transports waste.

A manhole chamber, also known as a concrete inspection chamber, is a hole in the ground that waste management professionals use to detect problems with your external drainage.

A manhole inspection chamber is usually precast chamber, five to six feet into the ground, with enough space to stand or use an inspection camera. You typically find these chambers in places where there are more than 22 feet of pipe running in a straight line, where drainage pipes change direction at an angle of greater than 30 degrees, and where the main draining runs meets a brain pipe.

A rainwater pipe, sometimes called a rainwater downpipe or rainwater drain pipe, is a system of tubes that safely carries water running off the roof of your property to the drainage system. Properties tend to have half-pipe tubes running beneath the roof that channel water away from the building during wet weather, preventing the roof from leaking into the home. Eventually, guttering carries water to the downpipes that run vertically along the edge of the house and to a surface drain.

Surface water drains collect water from a flat area at ground level, such as a driveway, patio or outside path. These drains require laying the ground in such a way that there is a slight gradient that will transport wastewater. Block paving drainage problems usually occur when material, such as twigs and leaves, block the movement of surface water into the funnel.

Surface water drains can also suffer from blocked mains underground. If debris gets into the pipe, water can no longer escape, and it sits on the surface, making foul water drainage more difficult.

Foul and surface water drainage needs to be kept separate from the rest of your outside draining system. This water goes directly to the water treatment plant.

A soil vent pipe also called a soil stack pipe, takes sewage and wastewater from a property and carries to the primary underground sewer system. Connected to the tube is a soil stack vent or “soil and vent pipe” which goes up to roof level, release foul smells into the atmosphere above.

After 1950, however, new regulations meant that builders stopped constructing combined foul and surface water drainage systems. Combined systems would often lead to the mixing of surface water with sewage from backed-up drains, leading to disease risk.

How to Unblock an Outside Drain

Take a look at this step-by-step guide for unblocking your drains.

If you have a blocked drain, the first thing you need to do is perform a visual inspection.

Check sink drainage across your property. See whether water drains freely down the plughole. If it does not, it could be a sign of a blockage.

Smelly drains are another sign of blocked drains. Check to see if there is anything obvious that might be causing the blockage. Look around your exterior grilles and grates as they may be blocked with leaves and twigs.

Also, try listening for gurgling noises when you pour water down the sink or flush the toilet. A fully-functioning system should drain quietly. If you have a blockage but cannot identify the problem, you may need a manhole drains inspection.

The next thing you need to do is get the tools you need for unblocking your drain.

First, grab some protective clothing. Waterproof gloves and full overall are the best options. Do not allow sewage to touch your skin.

With a DIY drain unblocker, you can physically dislodge whatever is blocking the flow of water, thus clearing blocked drains.

Next, grab a drainage rod – a long rod you push into the drainage system to clear the blockage. If you don’t have one of these, you can pick one up from most hardware stores. You may also need a bucket and hose, depending on the nature of the blockage.

Sometimes you’ll be able to reach the blockage by hand. Try pulling it out instead of pushing it deeper if you can. If you decide to remove a blockage manually, make sure that you wear waterproof gloves to protect your skin.

If you can’t reach the blockage, then you’ll need to use your plumber’s rod. For outside drains, try pushing the rod at different angles to dislodge the material. It can take several attempts.

DIY unblocking a toilet is relatively straightforward. You simply push the tool through the toilet’s piping as you would an outdoor pipe.

If you suspect that the blockage was caused by leaves, twigs or any other debris around your property, it’s a good idea to clear it up to prevent the same problem from happening again.

The best solution to blocked pipes is to prevent them from becoming clogged in the first place.

Avoid allowing any of the following substances and products into your drainage system:

When it comes to unblocking your drains, you have several options. You can either attempt a DIY method if you have the right tools or call out a drainage specialist. The best approach, as always, is to keep your drains healthy by not putting anything down them that might cause a blockage. Sanitary products, condoms, cotton buds and even your hair can all lead to backing up, foul smells, and problems transporting waste from your property.